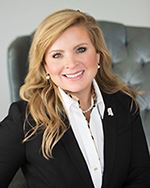 Angel Myers McIlrath was appointed by Governor Phil Bryant to serve as District Attorney for the 19th Circuit Court District of Mississippi, where she has served the citizens of Jackson, George, and Greene counties as an Assistant District Attorney for over 12 years.  In 2000, she earned a Bachelor of Arts degree in Political Science from the University of Southern Mississippi.

Angel attended law school at Mississippi College School of Law.  While in law school, Angel earned the Gayle and Victor Mavar scholarship, the Marble, Frisby, Griffin, and Gaines scholarship, and was a Joey Phillips Award Finalist.  She was admitted to practice law in the State of Mississippi in 2004.

Prior to joining the District Attorney’s Office, Angel practiced law as an associate at the law firm of Daniel, Coker, Horton & Bell.  Angel is a member of the Mississippi Bar Association, Jackson County Bar Association, National District Attorneys Association, and the Mississippi Prosecutors Association (MPA).  She has served the MPA as President, Vice-President, Secretary/Treasurer, as well as, being a current member of the Board of Directors, Legislative Committee, and Curriculum Committee.  She was integral in drafting and lobbying for MPA-sponsored legislation, including the Lonnie Smith Act (revised child abuse law), degrees of murder, voyeurism of children, and a number of other laws making our community safer.

Angel has presented in various forums on the topics of Physical Abuse and Neglect of Children, Sexual Abuse of Children, Child Exploitation, Constitutional Law, and Investigative Practices.

Angel is a member of the Mississippi Attorney General’s Internet Crimes Against Children Task Force.  She is also a member of the National District Attorney’s Association and the American Professional Society on the Abuse of Children.

In 2016, Angel was recognized as the Success Women’s Conference Woman of Achievement in Government Award winner. She was born in Pascagoula, Mississippi and currently resides in Ocean Springs.

Angel is the Founder and President of the SoSo Strong Pediatric Brain Tumor Foundation; a foundation Angel created in honor of her seven-year-old daughter, Sophia, who lost her eight-month battle with Diffuse Intrinsic Pontine Glioma (brain cancer) in October of 2017.

Angel is an active member of both St. Paul United Methodist Church and Mosaic Church, located in Ocean Springs.